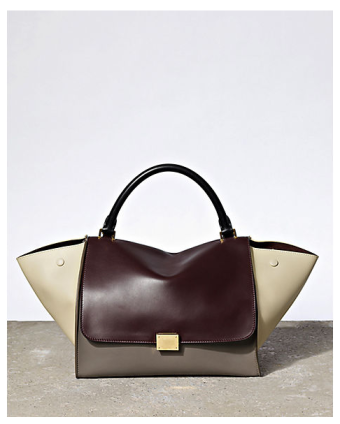 I had never been extraordinarily interested with the designer label Céline, until I recently began noticing the word “Céline” more numerously on bags that caught my attention.

Founded in 1945 by Céline Vipiana, the designer brand has become an international fashion phenomenon known for its luxury goods.

With designers such as Michael Kors and Roberto Menichetti reinventing the line with their pure genius in the fashion industry, it is no wonder how this company became sucha stylish revolution.

In June, 2011 Phoebe Philo of Céline was then awarded “International Designer of the Year,” by the CFDA for her extraordinary talents.

The top bag above I have seen glimpses on blogs, pinterest, and tumblr. Mentally noting the label Céline, I knew that one day, when I am successful, I would make it my number one goal to own that gorgeous bag.

Once I finally visited the site (probably not the best idea), I fell in love with many more bags. So now, after I’m successful, I will most likely celebrate every pinnacle of achievement I receive in hopes of ensuring I receive every Céline bag that is now, on my Christmas wish list.

One thought on “Céline Accessory Collections.. aka Merry Christmas… To Me?”