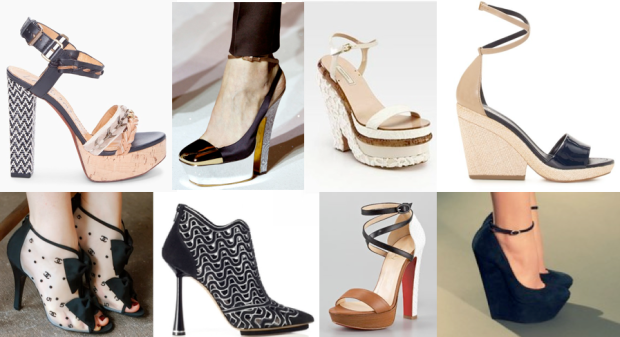 A women with good shoes is never ugly. They are the last touch of elegance.

I have always been a shoe person. My personal preference is the higher the heel, the better. I’d much rather sport a fierce pair of shoes, but of course, still enjoy the everyday classic pump. After reading one of my favorite coffee table books, “Shoes: A Celebration of Pumps, Sandals, Slippers & More,” I decided to share some fun facts about my favorite style accessory.

1. The Sandal was the first crafted footwear due to its simple construction. As early as 3500 B.C., the Egyptians molded braided papyrus into soles and attached raw hide thongs to keep them on the foot.

3. Egyptians and Romans drew the faces of their enemies on the soles of their sandals so they could literally step on them.

5. Heels were first worn by Egyptian butchers to raise their feet above the carnage and Mongolian horsemen to grip their stirrups more firmly.

6. The First recorded year the heels were worn “dressing up” purposes was 1533, when Catherine de Médicis brought heels from Florence to Paris for her wedding to the Duke d’Orléans.

7. In the 17th century, European women wore heels 5 inches or higher, but needed canes to balance themselves and not fall on their faces.

8. In the early 19th century, the term “slipper” was used to describe all delicate footwear.

9. Marie Antoinette employed a servant solely to tend to her 500 pairs of slippers, which were  categorized by date, color, and style.

10. Each Manolo Blahnik shoe goes through about 50 different production processes, so the factory in Parabiago, Italy, only turns out about 80 pairs a day. (O’Keefe, 157)

12. The Two Tone Pump, created by Raymond Massaro for Chanel in 1957, has appeared in every season since. The only difference between shoes are heel and toe shapes.

13. The Mary Jane Shoe is named after a character in the “Buster Brown” comic strip and first appeared in the New York Herald in 1902.

14. Running shoes became acceptable streetwear when thousands of women walked to work in suits and sneakers during the 1980 New York City transit strike.

15. One of the charges against Joan of Arc, whose rebellious behavior led her to be perceived a witch, was that she dressed in mens boots up to her thighs.

16. The legendary boot maker, Dave Little, once said, “Never trust a custom bootmaker who tells you his boots need to be broken in. When you leave here, you should be able to forget you have anything on your feet.”

17. Thigh-high boots were orginally worn by pirates and smugglers, who tucked stolen valuables into them – a practice that gave rise to the term “boot-legging.”

18. Church authorities approved of the fashionable chopine (platformed shoes made out of wood or cork in the 16th century) because it caused limited movement. Therefore, it discouraged wearers from participating in sinful activities like dancing.

19. Salvatore Ferragamo made his first pair of shoes at age 9.

20. In the 10th century in China, individuals would bind their foot in a torturous procedure to make the foot “smaller” and more “appealing.” Between the ages of 3-8 (depending on astrology for the gin lien initiation), a child would begin the process. Each day, a bandage would be tightened so the child could force their foot into a smaller shoe size in hopes of creating a cultural rarity: “The Golden Lotus.” Some feet were binded and reconstructed into an adult lotus foot only 3 inches long.

“The fact is, sometimes it’s really hard to walk in a single woman’s shoes. That’s why we need really special ones now and then to make the walk a little more fun.” 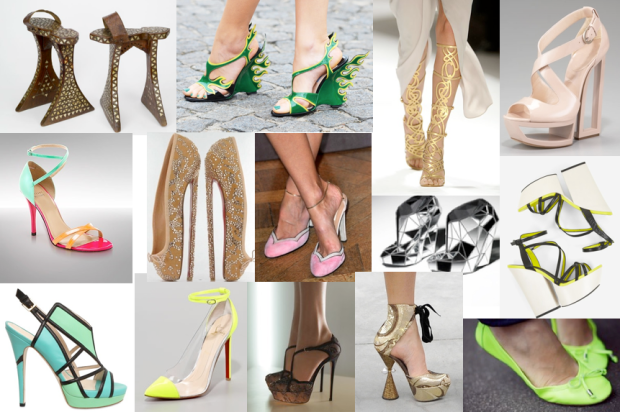 “Cinderella is proof that a pair of shoes can change your life.“